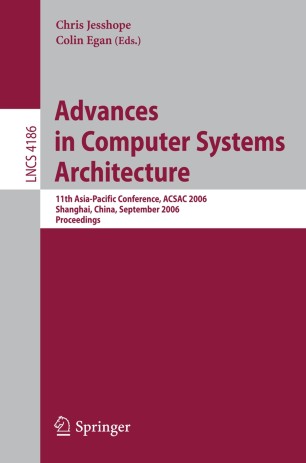 On behalf of all of the people involved in the program selection, the program committee members as well as numerous other reviewers, we are both relieved and pleased to present you with the proceedings of the 2006 Asia-Pacific Computer Systems Architecture Conference (ACSAC 2006), which is being hosted in Shanghai on September 6–8, 2006. This is the 11th in a series of conferences, which started life in Australia, as the computer architecture component of the Australian Computer Science Week. In 1999 it ventured away from its roots for the first time, and the fourth Australasian Computer Architecture Conference was held in the beautiful city of Sails (Auckland, New Zealand). Perhaps it was because of a lack of any other computer architecture conference in Asia or just the attraction of traveling to the Southern Hemisphere but the conference became increasingly international during the subsequent three years and also changed its name to include Computer Systems Architecture, reflecting more the scope of the conference, which embraces both architectural and systems issues. In 2003, the conference again ventured offshore to reflect its constituency and since then has been held in Japan in the beautiful city of Aizu-Wakamatsu, followed by Beijing and Singapore. This year it again returns to China and next year will move to Korea for the first time, where it will be organized by the Korea University.