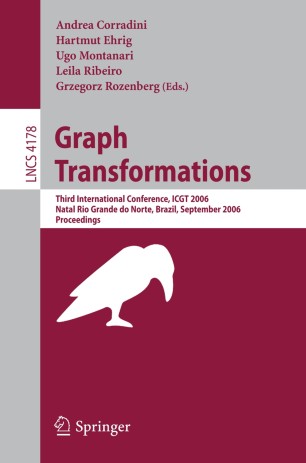 ICGT 2006 was the 3rd International Conference on Graph Transformation, following the previous two in Barcelona (2002) and Rome (2004), and a series of six international workshops between 1978 and 1998. ICGT 2006 was held in Natal (Rio Grande do Norte, Brazil) on September 17-23, 2006, co-located with the Brazilian Symposium on Formal Methods (SBMF 2006), under the auspices of the BrazilianComputer Society (SBC), the EuropeanAssociation of Software Science and Technology (EASST), the European Association for Theoretical Computer Science (EATCS) and the IFIP WG 1.3 on Foundations of Systems Speci?cation. The conference obtained partial support from Formal Methods Europe and IFIP TC 1 on Foundations of Computer Science. The scope of the conference concerned graphical structures of various kinds (like graphs, diagrams and visual sentences) that are useful when describing complex structures and systems in a direct and intuitive way. These structures are often enriched with formalisms that model their evolution via suitable kinds of transformations. The ?eld of the conference was concerned with the theory, applications, and implementation issues of such formalisms. Particularemphasis wasputonmetamodelswhichcanaccommodateavarietyofgraphicalstructures within the same abstract theory.