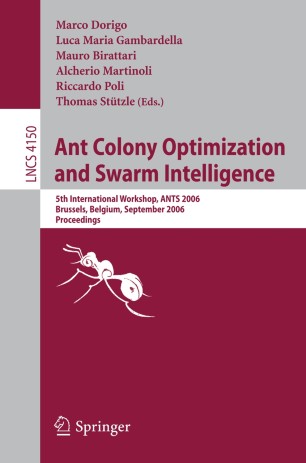 ANTS – The International Workshop on Ant Colony Optimization and Swarm Intelligence is now at its ?fth edition. The series started in 1998 with the - ganization of ANTS 1998. At that time the goal was to gather in a common meeting those researchers interested in ant colony optimization: more than 50 researchers from around the world joined for the ?rst time in Brussels, Belgium, to discuss ant colony optimization and swarm intelligence related research. A selectionofthebest paperspresentedatthe workshopwaspublished asa special issue of the Future Generation Computer Systems journal (Vol. 16, No. 8, 2000). Two years later, ANTS 2000, organized again in Brussels, attracted more than 70 participants. The 41 extended abstracts presented as talks or posters at the workshopwere collected in a booklet distributed to participants, and a selection of the best papers was published as a special section of the IEEE Transactions on Evolutionary Computation (Vol. 6, No. 4, 2002). After these ?rst two successful editions, it was decided to make of ANTS a seriesofbiannualeventswitho?cialworkshopproceedings.Thethirdandfourth editions were organized in September 2002 and September 2004, respectively. Proceedings were published by Springer within the Lecture Notes in Computer Science (LNCS) series. The proceedings of ANTS 2002, LNCS Volume 2463, contained 36 contri- tions: 17 full papers, 11 short papers, and 8 extended abstracts,selected out of a total of 52 submissions. Those of ANTS 2004, LNCS Volume 3172, contained 50 contributions:22 full papers, 19 shortpapers, and 9 extended abstracts,selected out of a total of 79 submissions.