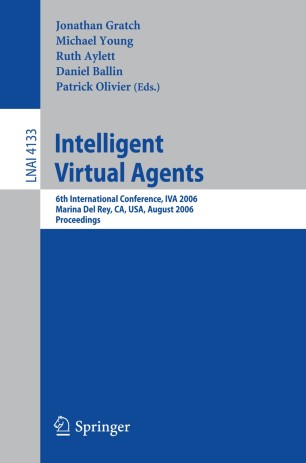 The origin of the Intelligent Virtual Agents conference dates from a successful workshop on Intelligent Virtual Environments held in Brighton, UK at the 13th European Conference on Arti?cial Intelligence (ECAI’98). This workshop was followed by a second one held in Salford in Manchester, UK in 1999.Subsequent events took place in Madrid, Spain in 2001, Isree, Germany in 2003 and Kos, Greece in 2005. Starting in 2006, Intelligent Virtual Agents moved from being a biennial to an annual event and became a full ?edged international conference, hosted in California. This volume contains the proceedings of the 6th International Conference on Intelligent Virtual Agents, IVA 2006, held in Marina del Rey, California, USA from August 21–23.For the second year in a row,IVA also hosted the Gathering of Animated Lifelike Agents (GALA 2006), an annual festival to showcase the latest animated lifelike agents created by university students and academic or industrial research groups. IVA 2006 received 73 submissions from Europe, the AmericasandAsia.Thepaperspublishedherearethe24fullpapersand11short papers presented at the conference, as well as one-page descriptions of posters and the featured invited talks by Brian Parkinson of Oxford University, Rod Humble of Electronic Arts, and Michael Mateas of the University of California, Santa Cruz and Andrew Stern of Procedural Arts.