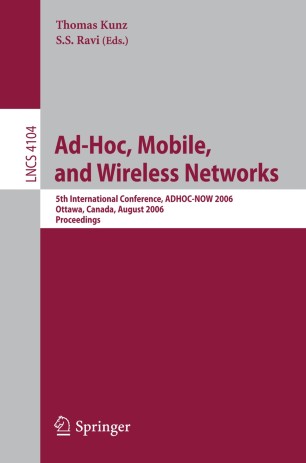 The 5th International Conference on Adhoc, Mobile and Wireless Networks (Adhoc-Now 2006) was held during August 17–19, 2006, in Ottawa, Canada. The ?rst four conferences in this series were held in Toronto (2002), Montreal (2003), Vancouver (2004) and Cancun (2005), respectively. The purpose of this conference is to provide a forum for researchers from academia/industry and practitioners to meet and exchange ideas regarding recent developments in the areas of ad hoc wireless networks. We received more than 170 papers for the conference submitted by authors from the following 25 countries: Australia, Bangladesh, Brazil, Canada, China, France, Germany, Greece, India, Iran, Ireland, Italy, Korea, Malaysia, Mexico, Nepal, Norway,Poland, Spain, Taiwan, The Netherlands, Turkey, UK, USA and Venezuela. Each paper was assignedto three members of the Technical Program Committee (TPC). Since each TPC member was responsible for generating - views for six to nine papers, we encouraged TPC members to delegate some reviews to other quali?ed reviewers. The names of all the TPC members and the additional reviewers appear elsewhere in this volume. Based on the reviews, we decided to accept 25 submissions as regular papers and 10 as short papers. Regular papers were given 25 minutes for presentation while short papers were given 15 minutes. All of the accepted papers appear in this volume. We are indebted to the TPC and the other reviewers for their detailed and timely reviews which enabled us to put together an excellent technical program.