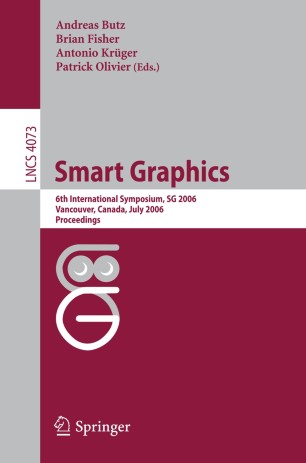 The International Symposium on Smart Graphics 2006 was held during July 23–25, 2006, at the University of British Columbia in Vancouver, Canada. It was the seventh event in a series which originally started in 2000 as an AAAI Spring Symposium. In response to the overwhelming success of the 2000 symposium, its or- nizers decided to turn it into a self-contained event. With the support of IBM, the ?rst two International Symposia on Smart Graphics were held at the T. J. Watson Research Center in Hawthorne, New York, in 2001 and 2002. The 2003 symposium moved to the European Media Lab in Heidelberg. Since then the conference has alternated between North America and Europe. It was held at Ban? Alberta Canada in 2004 and at the cloister Frauenw¨ orth on the island of Frauenchiemsee in Germany in 2005. The core idea behind these symposia is to bring together researchers and practitionersfrom the ?eld of computer graphics,arti?cialintelligence, cognitive science, graphic design and the ?ne arts. Each of these disciplines contributes to what we mean by the term “Smart Graphics”: the intelligent process of c- ating e?ective, expressive and esthetic graphical presentation. While artists and designers have been creating communicative graphics for centuries, arti?cial - telligence focuses on automating this process by means of the computer. While computer graphics provides the tools for creating graphical presentations in the ?rst place, the cognitive sciences contribute the rules and models of perception necessary for the design of e?ective graphics.