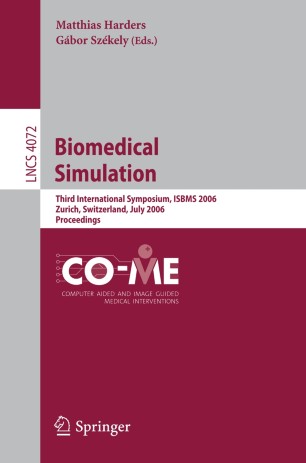 This book contains the written contributions to the Third International Sym- sium on Biomedical Simulation (ISBMS), which was held in Zurich, Switzerland, on July 10-11, 2006. The manuscripts are organized around three thematic sections which cover several of the major aspects of our rapidly growing ?eld: anatomical modeling and tissue properties, simulation of biophysical processes, as well as systems and applications. The symposium provided an international forum for researchers interested in using biomedical simulation technology for the improvement of patient care. It was held in the spirit and continuation of the symposia on Surgical Simulation and Soft Tissue Modeling (IS4TM) organized in 2003 by INRIA, and on Medical Simulation (ISMS) in 2004 by CIMIT. We received 37 submissions from 13 di?erent countries. Each was eva- ated by three members of the scienti?c committee. Based on these reviews, 12 manuscripts were selected for oral presentation and 11 for poster pres- tation. All accepted manuscripts were allowed a written contribution of equal length and were presented at the meeting in single track. The geographical bre- down of the di?erent institutions presenting their research was: Austria, Belgium, Canada, China, Denmark, France, Germany, Japan, Korea, Netherlands, Spain, and Switzerland. The quality of the contributions indicates that the symposium is an important milestone in our rapidly growing research area at the con?uence of several related disciplines. It was a great pleasure hosting this successful event, and we hope that all attendees enjoyed the intense and stimulating symposium.