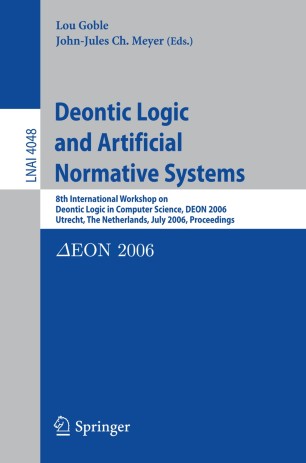 This volume presents the papers contributed to DEON 2006, the 8th Inter- tional Workshop on Deontic Logic in Computer Science, held in Utrecht, The Netherlands, July 12–14, 2006. These biennial DEON (more properly, ?EON) workshops are designed to promote international cooperation among scholars across disciplines who are interested in deontic logic and its use in computer science. They support research that links the formal-logical study of normative concepts and normative systems with computer science, arti?cial intelligence, philosophy, organization theory, and law. Papers for these workshops might address such general themes as the dev- opment of formal systems of deontic logic and related areas of logic, such as logics of action and agency, or the formal analysis of all sorts of normative concepts, such as the notions of rule, role, regulation, authority, power, rights, respon- bility, etc. , or the formal representation of legal knowledge. They might also be more concerned with applications, such as the formal speci?cation of systems for the management of bureaucratic processes in public or private administration, or the speci?cation of database integrity constraints or computer security protocols, and more. Of particular interest is the interaction between computer systems and their users. (The DEON 2006 website, http://www. cs. uu. nl/deon2006/,c- tains links to previous workshops and their papers. This history reveals a vibrant interdisciplinary research program.