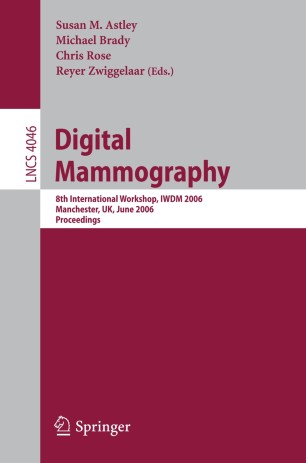 This volume of Springer’s Lecture Notes in Computer Science series records th the proceedings of the 8 International Workshop on Digital Mammography (IWDM), which was held in Manchester, UK, June 18–21, 2006. The meetings bringtogetheradiversesetofresearchers(physicists,mathematicians,computer scientists, engineers), clinicians (radiologists, surgeons) and representatives of industry, who are jointly committed to developing technology, not just for its ownsake,but to supportclinicians inthe earlydetection andsubsequentpatient management of breast cancer. The conference series was initiated at a 1993 meeting of the SPIE in San Jose, with subsequent meetings hosted every two years by researchers around the world. Previous meetings were held in York, Chicago, Nijmegen, Toronto, Bremen, and North Carolina. It is interesting to re?ect on the changes that have occurred during the past 13 years. Then, the dominant technology was ?lm-screen mammography; now it is full-?eld digital mammography. Then, there were few screening programmes world-wide; now there are many. Then, there was the hope that computer-aided detection (CAD) of early signs of cancer might be possible; now CAD is not only a reality but (more importantly) a commercially led clinical reality. Then, algorithmswerealmostentirelyheuristicwithlittleclinicalsupport;nowthereis arequirementforsubstantialclinicalsupportforanyalgorithmthatisdeveloped and published. However, upon re?ection, could we have predicted with absolute certainty what would be the key questions to be addressed over the subsequent (say) six years? No! That is the nature, joy, and frustration of research. There are more blind alleys to explore than there are rich veins that bring gold (in all senses of that analogy!).