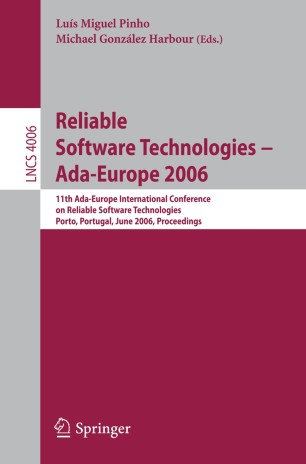 The 11th International Conference on Reliable Software Technologies, Ada- Europe 2006, took place in Porto, Portugal, June 5-9, 2006. It was as usual sponsored by Ada-Europe, the European federation of national Ada societies, in cooperation with ACM SIGAda. It was organized by members of the School of Engineering of the Polytechnic Institute of Porto, in collaboration with several colleagues from di?erent institutions in Europe. Following the usual style, the conference included a three-day technical p- gram, during which the papers contained in these proceedings were presented, bracketed by two tutorial days where attendants had the opportunity to catch up on a variety of topics related to the ?eld, at both introductory and advanced levels. Continuing the success achieved in the previous year, the technical p- gramalso included an industrial track, with contributions illustrating challenges facedandsolutionsencounteredbyindustrialists frombothsides ofthe Atlantic. Furthermore, the conference was accompanied by an exhibition where vendors presented their products for supporting reliable-software development.