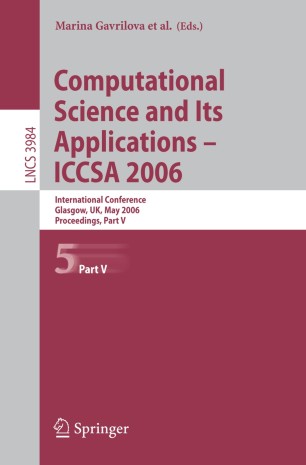 ICCSA: International Conference on Computational Science and Its Applications

Computational Science and Its Applications - ICCSA 2006

This ?ve-volume set was compiled following the 2006 International Conference on Computational Science and its Applications, ICCSA 2006, held in Glasgow, UK, during May 8–11, 2006. It represents the outstanding collection of almost 664 refereed papers selected from over 2,450 submissions to ICCSA 2006. Computational science has ?rmly established itself as a vital part of many scienti?c investigations, a?ecting researchers and practitioners in areas ranging from applications such as aerospace and automotive, to emerging technologies such as bioinformatics and nanotechnologies, to core disciplines such as ma- ematics, physics, and chemistry. Due to the shear size of many challenges in computational science, the use of supercomputing, parallel processing, and - phisticated algorithms is inevitable and becomes a part of fundamental theore- cal research as well as endeavors in emerging ?elds. Together, these far-reaching scienti?c areas contributed to shaping this conference in the realms of state-- the-art computational science researchand applications, encompassing the fac- itating theoretical foundations and the innovative applications of such results in other areas.