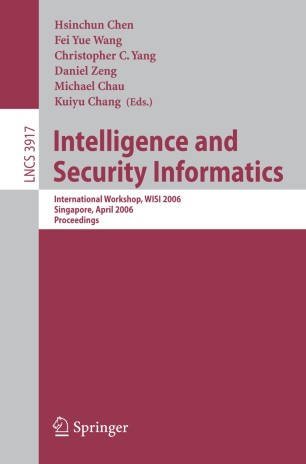 Intelligence and security informatics (ISI) can be broadly defined as the study of the development and use of advanced information technologies and systems for national and international security-related applications. The First and Second Symposiums on ISI were held in Tucson, Arizona, in 2003 and 2004, respectively. In 2005, the IEEE International Conference on ISI was held in Atlanta, Georgia. These ISI conferences brought together academic researchers, law enforcement and intelligence experts, information technology consultants and practitioners to discuss their research and practice related to various ISI topics including ISI data management, data and text mining for ISI applications, terrorism informatics, deception detection, terrorist and criminal social network analysis, crime analysis, monitoring and surveillance, policy studies and evaluation, and information assurance, among others. We continued these stream of ISI conferences by organizing the Workshop on Intelligence and Security Informatics (WISI 2006) in conjunction with the Pacific Asia Conference on Knowledge Discovery and Data Mining (PAKDD 2006). WISI 2006 provided a stimulating forum for ISI researchers in Pacific Asia and other regions of the world to exchange ideas and report research progress. WISI 2006 was hosted by the Chinese University of Hong Kong, the University of Arizona, the Nanyang Technological University, and the Chinese Academy of Sciences. The one-day program included one keynote speech, four refereed paper sessions, two invited sessions and a poster reception.