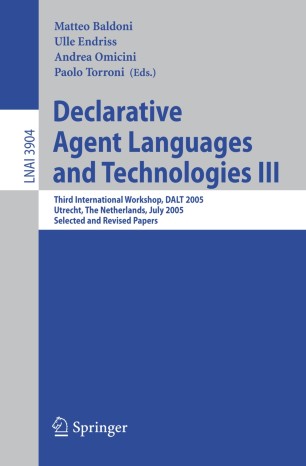 The workshop on Declarative Agent Languages and Technologies is a we- established venue for researchers interested in sharing their experiences in the areas of declarative and formal aspects of agents and multi-agent systems, and in engineering and technology. Today it is still a challenge to develop techno- gies that can satisfy the requirements of complex agent systems. The design and development of multi-agent systems still calls for models and technologies that ensure predictability, enable feature discovery, allow for the veri?cation of properties, and guarantee ?exibility. Declarative approaches are potentially a valuable means for satisfying the needs of multi-agent system developers and for specifying multi-agent systems. DALT 2005, the third edition of the workshop, was held in Utrecht, The Netherlands, in July 2005, in conjunction with AAMAS 2005, the Fourth Int- national Joint Conference on Agents and Multiagent Systems. Over 30 persons attended the workshop con?rming the success of the previous editions in M- bourne 2003 (LNAI 2990) and New York 2004 (LNAI 3476). The workshop series is a forum of discussion aimed both at supporting the transfer of decla- tive paradigms and techniques into the broader community of agent researchers andpractitioners, and atbringing theissuesofdesigningreal-world andcomplex agent systems to the attention of researchers working on declarative progr- ming and technologies.