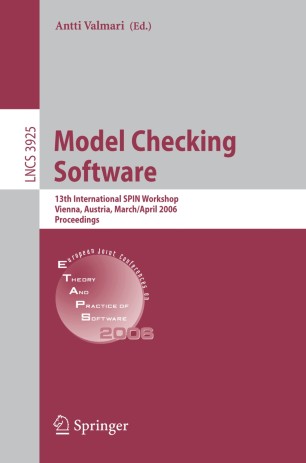 The name “SPIN” refers both to a workshopon model checking and to a famous model checking tool. The SPIN workshop is an annual forum for practitioners and researchersinterested in state space-based techniques for the validation and analysis of software and hardware systems, including communication protocols. It focuses on techniques based on explicit representations of state spaces, as implemented in the SPIN model checker or other tools, and techniques based on a combination of explicit representations with other representations. The SPIN model checker has proven to be particularly suited for the analysis of concurrent asynchronous systems. The workshop aims to encourage interaction and exchange of ideas with all related areas in software engineering. To promote interaction even further, many SPIN workshops have been held in conjunction with other meetings. The 13th International SPIN Workshop on Model Checking of Software was held in Vienna, Austria, co-located with the European Joint Conferences on Theory and Practice of Software (ETAPS) 2006. The earlier SPIN workshops were held in Montreal, Canada (1995); Rutgers University, USA (1996); Twente University, The Netherlands (1997); ENST, Paris, France (1998); Trento, Italy (1999); Toulouse, France (1999); Stanford University, USA (2000); Toronto, Canada (2001); Grenoble, France (2002); Portland, Oregon, USA (2003); Barcelona,Spain(2004);andSanFrancisco,USA(2005).Theproceedingsofthe Trento and Toulouse workshops were published together in Springer’s Lecture Notes in Computer Science volume 1680. From then on, each SPIN proceedings has been published as an individual LNCS volume.