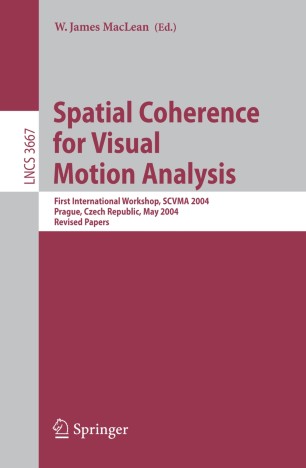 Motionanalysisisacentralproblemincomputervision,andthepasttwodecades have seen important advances in this ?eld. However, visual motion is still often considered on a pixel-by-pixel basis, even though this ignores the fact that image regions corresponding to a single object usually undergo motion that is highly correlated. Further, it is often of interest to accurately measure the boundaries of moving regions. In the case of articulated motion, especially human motion, discovering motion boundaries is non-trivial but an important task nonetheless. Another related problem is identifying and grouping multiple disconnected - gions moving with similar motions, such as a ?ock of geese. Early approaches focused on measuring motion of either the boundaries or the interior, but s- dom both in unison. For several years now, attempts have been made to include spatial coherence terms into algorithms for 2- and 3-D motion recovery, as well as motion boundary estimation. This volume is a record of papers presented at the First International Wo- shop on Spatial Coherence for Visual Motion Analysis, held May 15th, 2004 in Prague, in conjunction with the European Conference on Computer Vision (LNCS 3021–4). The workshop examined techniques for integrating spatial - herence constraints during motion analysis of image sequences. The papers were revised after the workshop to allow for incorporation of feedback from the workshop.