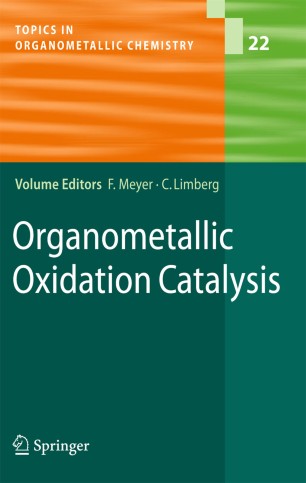 Eighty per cent of all compounds produced in the chemical and pharmaceutical industries require at least one essential catalytic step during their synthesis. At the same time the use of hydrocarbons as a feed-stock for commodity and fine chemicals typically requires an oxidation step, which is usually mediated by a transition metal compound. Consequently oxidation catalysis is a major research field in chemistry, both in academia and in industry. In many such processes, species with metal-carbon bonds are formed as key intermediates, and these processes represent the primary focus of this volume. An important aspect covered by some of the expert contributors is the use of organic ligands - and thus organometallic complex metal fragments - to achieve efficient oxidation catalysis. It has not been self-evident that organometallic complexes can survive the conditions necessary for polar oxygen-transfer reactions, but research over the last decade concerning oxo and peroxo complexes functionalized by organic ligands has clearly shown that relatively non-polar M-C bonds can be quite stable in the presence of oxidants and protic media, and that they may even be essential for the favourable activity and life-time of a catalyst. Also considered in this context is the oxidation chemistry of basic organometallic species in the gas phase, as this may reveal fundamental characteristics inherent to oxidation catalysts.