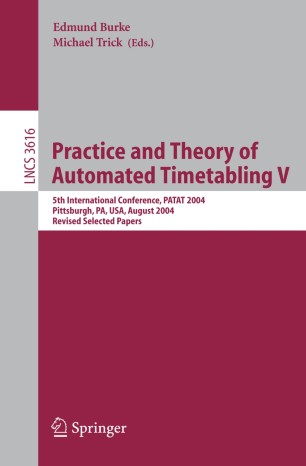 PATAT: International Conference on the Practice and Theory of Automated Timetabling

Thisvolumecontainsaselectionofpapersfromthe5thInternationalConference on the Practice and Theory of Automated Timetabling (PATAT 2004) held in Pittsburgh, USA, August 18–20, 2004. Indeed, as we write this preface, in the Summer of 2005, we note that we are about one month away from the tenth anniversary of the very ?rst PATAT conference in Edinburgh. Since those very early days, the conference series has gone from strength to strength and this volume represents the latest in a series of ?ve rigorously refereed volumes which showcase a broad spectrum of ground-breaking timetabling research across a very wide range of timetabling problems and applications. Timetabling is an area that unites a number of disparate ?elds and which cuts across a number of diverse academic disciplines. While the most obvious instances of timetabling occur in educational institutions, timetabling also - pears in sports applications, transportation planning, project scheduling, and many other ?elds. Viewing timetabling as a unifying theme enables researchers fromthesevariousareastolearnfromeachotherandtoextendtheirown- searchandpracticeinnewandinnovativeways.Thisvolumecontinuesthetrend of the conference series to extend the de?nition of timetabling beyond its edu- tional roots. In this volume, seven of the 19 papers involve domains other than education. Of course, educationaltimetabling remains at the coreof timetabling research, and the papers in this volume represent the full range of this area including exam timetabling, room scheduling, and class rostering.