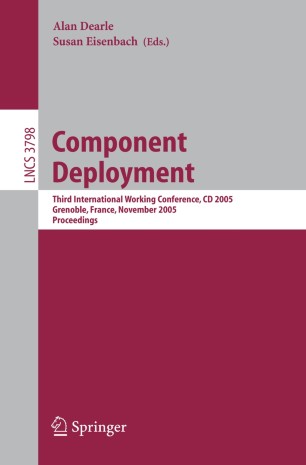 This volume of Lecture Notes in Computer Science contains the proceedings of the rd 3 Working Conference on Component Deployment (CD 2005), which took place from 28 to 29, November 2005 in Grenoble, France, and co-located with Middleware 2005. CD 2005 is the third international conference in the series, the first two being held in Berlin and Edinburgh in 2002 and 2004, respectively. The proceedings of both these conferences were also published by Springer in the Lecture Notes in Computer Science series and may be found in volumes 2370 and 3083. Component deployment addresses the tasks that need to be performed after components have been developed and addresses questions such as: • What do we do with components after they have been built? • How do we deploy them into their execution environment? • How can we evolve them once they have been deployed? CD 2005 brought together researchers and practitioners with the goal of deve- ping a better understanding of how deployment takes place in the wider context. The Program Committee selected 15 papers (12 long papers, three short papers) out of 29 submissions. All submissions were reviewed by at least three members of the Program Committee. Papers were selected based on originality, quality, soundness and relevance to the workshop.