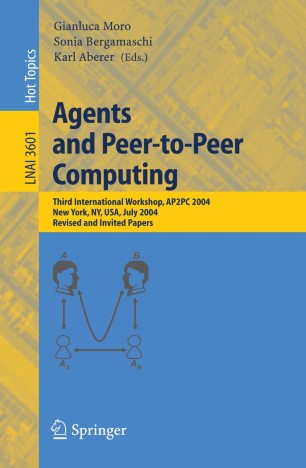 Peer-to-peer (P2P) computing is attracting enormous media attention, spurred by the popularity of file sharing systems such as Napster, Gnutella, and Morpheus. The peers are autonomous, or as some call them, first-class citizens. P2P networks are emerging as a new distributed computing paradigm for their potential to harness the computing power of the hosts composing the network and make their under-utilized resources available to others. Although researchers working on distributed computing, multiagent systems, databases and networks have been using similar concepts for a long time, it is only recently that papers motivated by the current P2P paradigm have started appearing in high-quality conferences and workshops. Research in agent systems in particular appears to be most relevant because, since their inception, multiagent systems have always been thought of as networks of peers. The multiagent paradigm can thus be superimposed on the P2P architecture, where agents embody the description of the task environments, the decision-support capabilities, the collective behavior, and the interaction protocols of each peer. The emphasis in this context on decentralization, user autonomy, ease and speed of growth that gives P2P its advantages also leads to significant potential problems. Most prominent among these problems are coordination, the ability of an agent to make decisions on its own actions in the context of activities of other agents, and scalability, the value of the P2P systems lies in how well they scale along several dimensions, including complexity, heterogeneity of peers, robustness, traffic redistribution, and so on.

This volume presents the fully revised papers presented at the Third International Workshop on Agents and Peer-to-Peer Computing, AP2PC 2004, held in New York City on July 19, 2004 in the context of the Third International Joint Conference on Autonomous Agents and Multi-Agent Systems (AAMAS 2004). The volume is organized in topical sections on P2P networks and search performance, emergent communities and social behaviours, semantic integration, mobile P2P systems, adaptive systems, agent-based resource discovery, as well as trust and reputation.