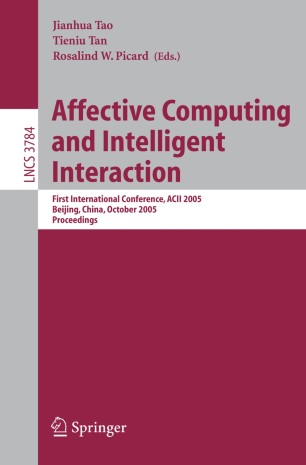 This volume contains the proceedings of the 1st International Conference on A?ective Computing and Intelligent Interaction (ACII 2005) held in Beijing, China, on 22–24 October 2005. Traditionally, the machine end of human–machine interaction has been very passive, and certainly has had no means of recognizing or expressing a?ective information. But without the ability to process such information, computers cannot be expected to communicate with humans in a natural way. The ability to recognize and express a?ect is one of the most important features of - man beings. We therefore expect that computers will eventually have to have the ability to process a?ect and to interact with human users in ways that are similar to those in which humans interact with each other. A?ective computing and intelligent interaction is a key emerging technology that focuses on m- iad aspects of the recognition, understanding, and expression of a?ective and emotional states by computers. The topic is currently a highly active research area and is receiving increasing attention. This strong interest is driven by a wide spectrum of promising applications such as virtual reality, network games, smart surveillance, perceptual interfaces, etc. A?ective computing and intelligent interaction is a multidisciplinary topic, involving psychology, cognitive science, physiology and computer science. ACII 2005 provided a forum for scientists and engineers to exchange their technical results and experiences in this fast-moving and exciting ?eld. A total of 45 oral papers and 82 poster papers included in this volume were selected from 205 c- tributionssubmittedbyresearchersworldwide.