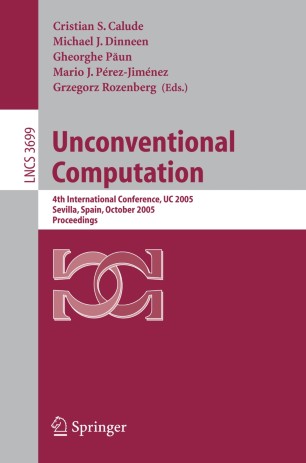 The Fourth International Conference on Unconventional Computation, UC 2005, organized under the auspices of EATCS by the Centre for Discrete Mathematics and Theoretical Computer Science and the Department of C- puter Science and Arti?cial Intelligence of the University of Seville, was held in Seville, October 3–7, 2005. Seville, one of the most beautiful cities in Spain, is at its best in October. An explosion of colour and contrast: ?amenco, bull?ghting, and a lively at- sphere in the streets due to the open and friendly nature of its people. The river Guadalquivir, the Cathedral and the Golden Tower are all places full of magic where the visitor can feel the spirit of a city which is eternally romantic. The series of International Conferences Unconventional Computation (UC),https://www.cs.auckland.ac.nz/CDMTCS/conferences/uc/isdevoted to all aspects of unconventional computation, theory as well as experiments and applications. Typical, but not exclusive, topics are: natural computing including quantum, cellular,molecular, neural and evolutionarycomputing; chaosand - namical systems based computing; and various proposals for computations that go beyond the Turing model. The ?rst venue of the Unconventional Computation Conference (formerly called Unconventional Models of Computation) was Auckland, New Zealand in 1998; subsequent sites of the conference were Brussels, Belgium in 2000 and Kobe, Japan in 2002. The titles of the proceedings volumes from past UC Conferences are as follows: 1. C.S. Calude, J. Casti, M.J. Dinneen (eds.). Unconventional Models of C- putation, Springer-Verlag, Singapore, 1998, viii + 426 pp. ISBN: 981-3083- 69-7.