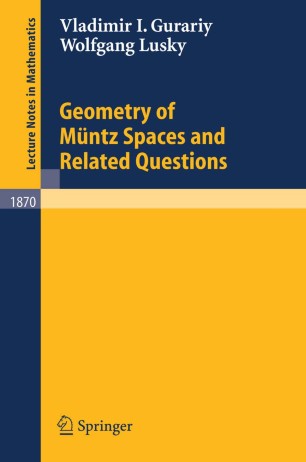 Starting point and motivation for this volume is the classical Muentz theorem which states that the space of all polynomials on the unit interval, whose exponents have too many gaps, is no longer dense in the space of all continuous functions. The resulting spaces of Muentz polynomials are largely unexplored as far as the Banach space geometry is concerned and deserve the attention that the authors arouse. They present the known theorems and prove new results concerning, for example, the isomorphic and isometric classification and the existence of bases in these spaces. Moreover they state many open problems. Although the viewpoint is that of the geometry of Banach spaces they only assume that the reader is familiar with basic functional analysis. In the first part of the book the Banach spaces notions are systematically introduced and are later on applied for Muentz spaces. They include the opening and inclination of subspaces, bases and bounded approximation properties and versions of universality.