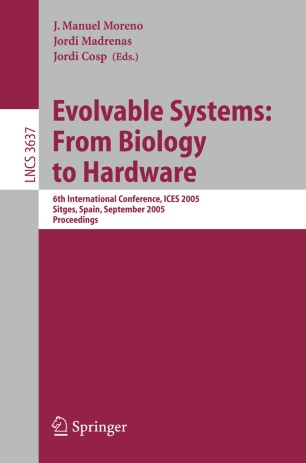 Evolvable Systems: From Biology to Hardware

The flying machines proposed by Leonardo da Vinci in the fifteenth century, the se- reproducing automata theory proposed by John von Neumann in the middle of the twentieth century and the current possibility of designing electronic and mechanical systems using evolutionary principles are all examples of the efforts made by humans to explore the mechanisms present in biological systems that permit them to tackle complex tasks. These initiatives have recently given rise to the emergent field of b- inspired systems and evolvable hardware. The inaugural workshop, Towards Evolvable Hardware, took place in Lausanne in October 1995, followed by the successive events of the International Conference on Evolvable Systems: From Biology to Hardware, held in Tsukuba (Japan) in October 1996, in Lausanne (Switzerland) in September 1998, in Edinburgh (UK) in April 2000, in Tokyo (Japan) in October 2001, and in Trondheim (Norway) in March 2003. Following the success of these past events the sixth international conference was aimed at presenting the latest developments in the field, bringing together researchers who use biologically inspired concepts to implement real systems in artificial intelligence, artificial life, robotics, VLSI design, and related domains. The sixth conference consolidated this biennial event as a reference meeting for the community involved in bio-inspired systems research. All the papers received were reviewed by at least three independent reviewers, thus guaranteeing a high-quality bundle for ICES 2005.