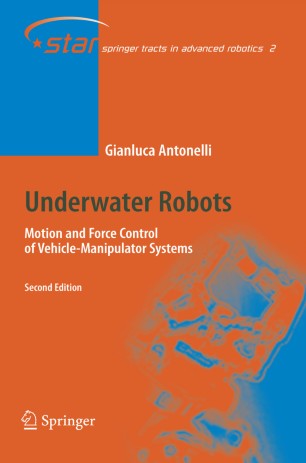 This book deals with the main control aspects in underwater manipulation tasks. The mathematical model with significant impact on the control strategy is discussed. The problem of controlling a 6-degrees-of-freedoms autonomous underwater vehicle is deeply investigated and a survey of fault detection/tolerant strategies for unmanned underwater vehicles is provided; experimental results obtained with the vehicle ODIN are presented. The presence of a manipulator is further studied in the aspects of kinematic, dynamic and interaction control. The purpose of this second edition is to add material not covered in the first edition as well as streamline and improve the previous material.

"The book under review is particularly concerned with the control of underwater vehicle/manipulator systems (UVMSs). … The text does a good job of discussing many of the issues particularly to UVMSs. Because of the variety of control algorithms discussed it is perhaps best suited for an experimental researcher searching for a collection of control laws which can be implemented on their system. … wealth of references as well as its comments on issues particular to underwater robotic make it interesting to anyone interested in UVMSs." (Sean Andersson, Automatica, Vol. 42, 2006)

"This book deals with underwater robots, their motions, force control and manipulation tasks. … The book contains a wide list of underwater robots (AUVs) control problems. … The author presents natural and digital simulations. … The realization of AUVs is a complex scientific problem of significant importance. And this book is a step forward in studying them." (Yuri N. Sankin, Zentralblatt MATH, Vol. 1049, 2004)

"Underwater robotics is a very interesting field of study … . The main aspects … are separately illustrated and investigated and several nice contributions - stemming from the work of the author and of the research group he belongs to – to comprehend it better and, ultimately, to design satisfactory solutions are presented. … the book is very well organized and it is written in a pleasantly concise style. Graduate students and researchers … will find it readable and rich of valuable material" (Giuseppe Conte, Adaptive Control and Signal Processing, Vol. 18 (7), 2004)

"The book originates from a PhD thesis defended by the author in 1999 at Naples University … . A great number of figures of good quality are also included. … Underwater Robots: Motion and Force Control of Vehicle Manipulator Systems provides an interesting reference text about control of underwater robots. The monograph can be useful for researchers interested by this field or, more widely, for scientists involved in control of manipulators with mobile bases or mobile robots in three-dimensional space." (M. Pascal, Applied Mechanics Reviews, Vol. 56 (6), 2003)

“The book begins by presenting a short discussion on the state of underwater vehicle technology. … Underwater Robots does an excellent job presenting many of the issues related to the modeling and control of UVMs. … The number of references is impressive, and most of the work in the field that any researcher would need to consult for a deeper understanding of the state of the art is included. … a good source for readers interested in the general field of autonomous underwater vehicles.” (Alexander Leonessa, IEEE Control Systems Magazine, Vol. 28, October, 2008)