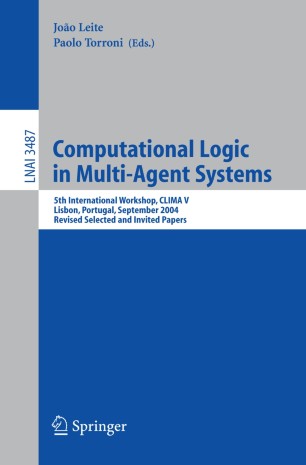 The notion of agency has recently increased its in?uence in the research and - velopment of computational logic based systems, while at the same time sign- cantly gaining from decades of research in computational logic. Computational logic provides a well-de?ned, general, and rigorous framework for studying s- tax, semantics and procedures, for implementations, environments, tools, and standards, facilitating the ever important link between speci?cation and ver- cation of computational systems. The purpose of the Computational Logic in Multi-agent Systems (CLIMA) international workshop series is to discuss techniques, based on computational logic, for representing, programming, and reasoning about multi-agent systems in a formal way. Former CLIMA editions were conducted in conjunction with other major computational logic and AI events such as CL in July 2000, ICLP in December 2001, FLoC in August 2002, and LPNMR and AI-Math in January 2004. The ?fth edition of CLIMA was held Lisbon, Portugal, in September 29–30, 2004.We,asorganizers,andinagreementwiththeCLIMASteeringCommittee, opted for co-location with the 9th European Conference on Logics in Arti?cial Intelligence (JELIA 2004), wishing to promote the CLIMA research topics in the broader community of logics in AI, a community whose growing interest in multi-agent issues has been demonstrated by the large number of agent-related papers submitted to recent editions of JELIA. The workshop received 35 submissions – a sensible increase from the previous edition.Thesubmittedpapersshowedthatthelogicalfoundationsofmulti-agent systems are felt by a large community to be a very important research topic, upon which classical AI and agent-related issues are to be addressed.