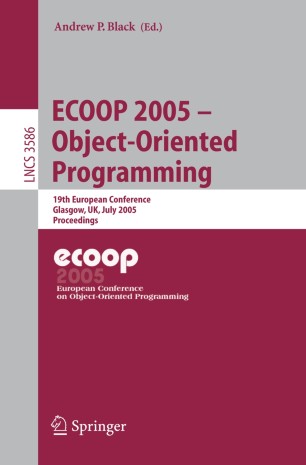 The 19th Annual Meeting of the European Conference on Object-Oriented Programming—ECOOP 2005—took place during the last week of July in Glasgow, Scotland, UK. This volume includes the refereed technical papers p- sented at the conference, and two invited papers. It is traditional to preface a volume of proceedings such as this with a note that emphasizes the importance of the conference in its respective ?eld. Although such self-evaluations should always be taken with a large grain of salt, ECOOP is undisputedly the pre- inent conference on object-orientation outside of the United States. In its turn, object-orientationis today’s principaltechnology not only for programming,but also for design, analysisand speci?cation of softwaresystems. As a consequence, ECOOP has expanded far beyond its roots in programming to encompass all of these areas of research—whichis why ECOOP has remained such an interesting conference. But ECOOP is more than an interesting conference. It is the nucleus of a technical and academic community, a community whose goals are the creation and dissemination of new knowledge. Chance meetings at ECOOP have helped to spawn collaborations that span the boundaries of our many subdisciplines, bring together researchers and practitioners, cross cultures, and reach from one side of the world to the other. The ubiquity of fast electronic communication has made maintaining these collaborations easier than we would have believed possible only a dozen years ago. But the role of conferences like ECOOP in establishing collaborations has not diminished.