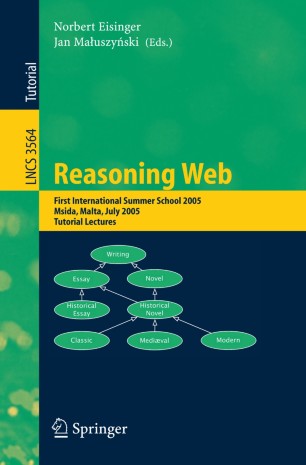 This volume contains the tutorial papers of the Summer School “Reasoning Web,”July25–29,2005(http://reasoningweb. org). TheSchoolwashostedbythe University of Malta and was organized by the Network of Excellence REWERSE “Reasoning on the Web with Rules and Semantics” (http://rewerse. net), funded by the EU Commission and by the Swiss Federal O?ce for Edu- tion and Science within the 6th Framework Programme under the project ref- ence number 506779. The objective of the school was to provide an introduction into methods and issues of the Semantic Web, a major endeavor in current Web research, where the World Wide Web Consortium W3C plays an important role. The main idea of the Semantic Web is to enrich Web data with meta-data carrying a “meaning” of the data and allowing Web-based systems to reason about data (and meta-data). The meta-data used in Semantic Web applications is usually linked to a conceptualization of the application domain shared by di?erent applications. Such a conceptualization is called an ontology and sp- i?es classes of objects and relations between them. Ontologies are de?ned by ontology languages, based on logic and supporting formal reasoning. Just as the current Web is inherently heterogeneous in data formats and data semantics, the Semantic Web will be inherently heterogeneous in its reasoning forms. - deed, any single form of reasoning turns out to be insu?cient in the Semantic Web.