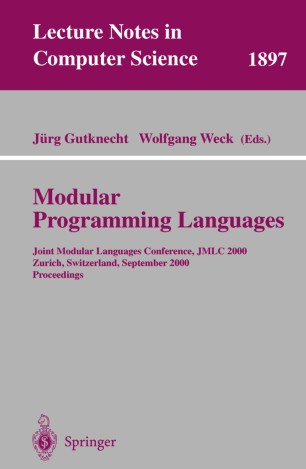 Thecircleisclosed.The European Modula-2 Conference was originally launched with the goal of increasing the popularity of Modula-2, a programming language created by Niklaus Wirth and his team at ETH Zuric ¨ h as a successor of Pascal. For more than a decade, the conference has wandered through Europe, passing Bled,Slovenia,in1987,Loughborough,UK,in1990,Ulm,Germany,in1994,and Linz, Austria, in 1997. Now, at the beginning of the new millennium, it is back at its roots in Zuric ¨ h, Switzerland. While traveling through space and time, the conference has mutated. It has widened its scope and changed its name to Joint Modular Languages Conference (JMLC). With an invariant focus, though, on modularsoftwareconstructioninteaching,research,and“outthere”inindustry. This topic has never been more important than today, ironically not because of insu?cient language support but, quite on the contrary, due to a truly c- fusing variety of modular concepts o?ered by modern languages: modules, pa- ages, classes, and components, the newest and still controversial trend. “The recent notion of component is still very vaguely de?ned, so vaguely, in fact, that it almost seems advisable to ignore it.” (Wirth in his article “Records, Modules, Objects, Classes, Components” in honor of Hoare’s retirement in 1999). Clar- cation is needed.