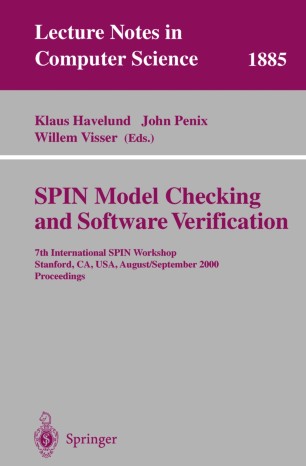 The SPIN workshop is a forum for researchers interested in the subject of automata-based, explicit-state model checking technologies for the analysis and veri?cation of asynchronous concurrent and distributed systems. The SPIN - del checker (http://netlib.bell-labs.com/netlib/spin/whatispin.html), developed by Gerard Holzmann, is one of the best known systems of this kind, and has attracted a large user community. This can likely be attributed to its e?cient state exploration algorithms. The fact that SPIN’s modeling language, Promela, resembles a programming language has probably also contributed to its success. Traditionally, the SPIN workshops present papers on extensions and uses of SPIN. As an experiment, this year’s workshop was broadened to have a slightly wider focus than previous workshops in that papers on software veri?cation were encouraged. Consequently, a small collection of papers describe attempts to analyze and verify programs written in conventional programming languages. Solutions include translations from source code to Promela, as well as specially designed model checkers that accept source code. We believe that this is an - teresting research direction for the formal methods community, and that it will result in a new set of challenges and solutions. Of course, abstraction becomes the key solution to deal with very large state spaces. However, we also see - tential for integrating model checking with techniques such as static program analysis and testing. Papers on these issues have therefore been included in the proceedings.