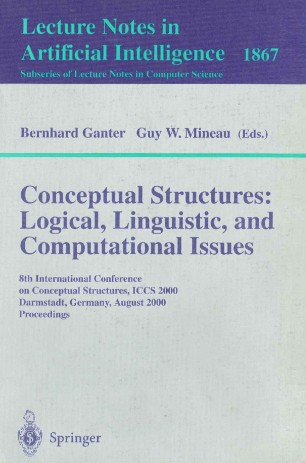 Computerscientistscreatemodelsofaperceivedreality.ThroughAItechniques, these models aim at providing the basic support for emulating cognitive - havior such as reasoning and learning, which is one of the main goals of the AI research e?ort. Such computer models are formed through the interaction of various acquisition and inference mechanisms: perception, concept learning, conceptual clustering, hypothesis testing, probabilistic inference, etc., and are represented using di?erent paradigms tightly linked to the processes that use them. Among these paradigms let us cite: biological models (neural nets, genetic programming), logic-based models (?rst-order logic, modal logic, rule-based s- tems), virtual reality models (object systems, agent systems), probabilistic m- els(Bayesiannets,fuzzylogic),linguisticmodels(conceptualdependencygraphs, language-based representations), etc. OneofthestrengthsoftheConceptualGraph(CG)theoryisitsversatilityin terms of the representation paradigms under which it falls. It can be viewed and therefore used, under di?erent representation paradigms, which makes it a p- ular choice for a wealth of applications. Its full coupling with di?erent cognitive processes lead to the opening of the ?eld toward related research communities such as the Description Logic, Formal Concept Analysis, and Computational Linguistic communities. We now see more and more research results from one community enrich the other, laying the foundations of common philosophical grounds from which a successful synergy can emerge.