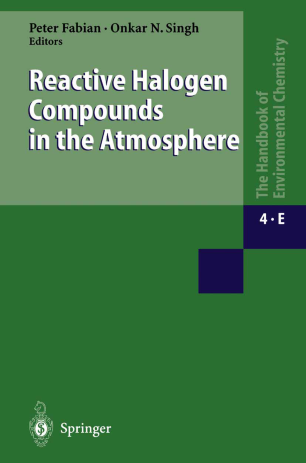 Reactive Halogen Compounds in the Atmosphere

Part of the The Handbook of Environmental Chemistry book series (HEC, volume 4E)

Benign substances such as CFCs - nontoxic, noncorrosive, nonflammable and nonreactive with most other substances and considered ideal compounds for many purposes threaten our life protective shield, the atmospheric ozone layer. These "wonder compounds", drifting intact up to the stratosphere, are photolyzed there by the Sun's UV radiation releasing millions of tons of chlorine atoms each one capable of catalytically destroying thousands of ozone molecules. Scientific evidence clearly shows that chlorine and bromine compounds, such as CFCs, released into the atmosphere are responsible for continuous and progressing global ozone losses superimposed by dramatic seasonal ozone depletions over Antarctica and Arctic regions as well.
Substitutes are produced and emitted today, partly halogenated hydrocarbons, some of which are highly reactive in the troposphere. Along with reactive substances of natural origin, they have opened a new dimension of atmospheric photochemistry. This handbook volume deals with these reactive halogen compounds and their interactions.It provides a review of the present knowledge of their properties, applications, sources, sinks as well as international regulations.