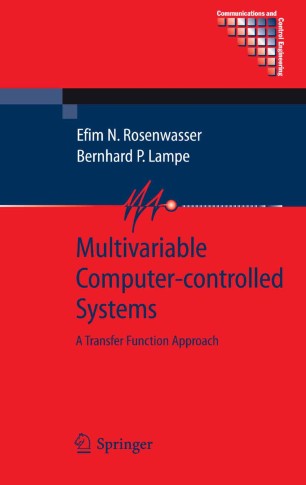 Having established the ability of the parametric transfer function to solve this problem for single-input, single-output systems in previous work, the authors extend these methods, which incorporate time-dependence, to the idea of the parametric transfer matrix in a complete exposition of analysis and design methods for multiple-input, multiple-output (MIMO) sampled-data systems.

• Preliminary algebraic material describing the established fundamentals of polynomial and rational matrices necessary for the understanding of later chapters.

• Control problems, important in their own right but which also have a substantial bearing on what follows (eigenvalue assignment and the use of z- and zeta-transforms in discrete systems).

Appendices covering basic mathematical formulae and the description of two MATLAB® toolboxes round out this self-contained guide to multivariable control systems.

E.N. Rosenwasser holds the chair for automated ship complexes at the State University of Ocean Technology of Saint Petersburg, Russia. Prof. Rosenwasser is one of the leading Russian control scientists. His research results are published in more than 200 publications including 15 monographs.

Bernhard P. Lampe is Professor for automatic control at the Institute of Automation, Department Electrical Engineering and Computer Sciences at the University of Rostock, Germany. Prof. Lampe is initiator and leader of numerous research projects in theory and application of advanced control methods, as well as author and co-author of more than 250 publications including 5 monographs.

"The monograph throws the bridge between continuous and discrete control systems. … The authors extend known approaches to achieve a comprehensive analysis of computer control systems belonging to the class of sampled data systems. … The book contains also an Appendix providing additional mathematical problems, description of the toolbox for optimal design multivariable sampled data systems and design towards achieving a guaranteed control system performance. The book is very interesting for researchers and graduate students who want to extend their knowledge on modern control systems." (Krzysztof Galkowski, Zentralblatt MATH, Vol. 1123 (1), 2008)

“Multivariable Computer-Controlled Systems is dedicated to the theory of multivariable control systems, and the material is presented in a formal, mathematical style. … The book also contains several appendices, including a description of a Matlab toolbox for controller design. … the authors have done an admirable job in collecting the necessary material in one place … . experts will no doubt value the book for its concise presentation and its focused approach … .” (Matthew C. Turner, IEEE Control Systems Magazine, Vol. 28, December, 2008)