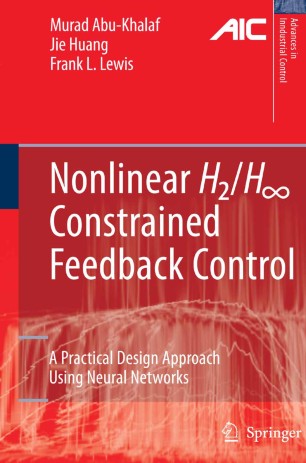 Modern aerospace, automotive, nautical, industrial, microsystem-assembly and robotic systems are becoming more and more complex. High-performance vehicles no longer have built-in error safety margins, but are inherently unstable by design to allow for more flexible maneuvering options. With the push towards better performance in terms of greater accuracy and faster speed of response, control demands are increasing. The combination of highly nonlinear dynamics, relaxed static stability, and tight performance specifications places increasing demands on the design of feedback systems for control. Current control system design techniques have difficulty in meeting these demands.

In this book the authors present algorithms for H2 and H-infinity design for nonlinear systems which, unlike earlier theories, provide solution techniques for the core Hamilton–Jacobi equations that yield control systems which can be implemented in real systems; neural networks are used to solve the nonlinear control design equations. Industrial and aerospace systems usually have constraints on the amplitudes of the control actuator inputs so techniques are set out for dealing with these. All results are proven mathematically to give confidence and performance guarantees and the design algorithms can be used to obtain practically useful controllers. Nearly optimal applications to constrained-state and minimum-time problems are also discussed and since control systems are usually implemented using computer microprocessors, a chapter is devoted to discrete-time design to yield digital controllers.

Nonlinear H2/H-infinity Constrained Feedback Control will be of major importance to control systems designers working in industrial, automotive, robotic, military and chemical process systems. Design and simulation case studies are given and the design of nonlinear control systems of the same caliber as those obtained in recent years using linear optimal and bounded-norm designs based on the Riccati equation is explained together with feedback control systems of guaranteed high performance that can be implemented directly as a nonlinear network structure. With its opening chapter introducing such necessary control system foundations as Lyapunov theory, passivity and game theory, the book will also be of great interest to academics and their graduate students in control systems as a complete foundation for H2 and H-infinity design.

Dr. Lewis’s current interests include intelligent control, neural and fuzzy systems, microelectromechanical systems (MEMS), wireless sensor networks, nonlinear systems, robotics, condition-based maintenance, and manufacturing process control. He is the author/co-author of 3 U.S. patents, 157 journal papers, 23 chapters and encyclopedia articles, 239 refereed conference papers, nine books, including Optimal Control, Optimal Estimation, Applied Optimal Control and Estimation, Aircraft Control and Simulation, Control of Robot Manipulators, Neural Network Control, High-Level Feedback Control with Neural Networks and the IEEE reprint volume Robot Control. He was elected to the Editorial Boards of International Journal of Control, Neural Computing and Applications, and Int. J. Intelligent Control Systems. He served as an Editor for the flagship journal Automatica. He is the recipient of an NSF Research Initiation Grant and has been continuously funded by NSF since 1982. Since 1991 he has received $4.8 million in funding from NSF and other government agencies, including significant DoD SBIR and industry funding and his research has won numerous awards and prizes

Doctor Huang is a professor at the Department of Automation and Computer-aided Engineering, The Chinese University of Hong Kong. He is also the director of Applied Control and Computing Laborotory, and the head of the graduate division of Automation and Computer-aided Engineering. He has been advisory/visiting professor at several universities and a Science Advisor to the Leisure and Cultural Services Department of Hong Kong Special Administrative Region. His research interests include control theory and applications, robotics and automation, neural networks and scientific computing, and guidance and control of flight vehicles. His research has led to publications of over 100 technical papers in international journals and conferences, and four book chapters.

Dr. Huang is a member of Editorial Board of Communications in Information and Systems, Control Theory and Applications, and Associate Editor of IEEE Transactions on Automatic Control. He was an Associate Editor of the Asian Journal of Control between 1999 and 2001. He has been Guest Editor for International Journal of Robust and Nonlinear Control, and Asian Journal of Control. He has served in the organizing committee or program committee of various major international conferences including the general chair of 2002 International Conference on Control and Automation, Publicity Chair of 2003 IEEE Conference on Decision and Control, and program committee member of the 1998, and 2002 IEEE Conferences on Decision and Control.

"This book examines some fundamental modern control problems of nonlinear systems … . The book is very well written. … The results included in the book, along with an extensive bibliography will prove to be an important resource for researchers in this area as well as researchers interested in entering this area. … a good text for a graduate or advanced undergraduate course. Short courses or training courses for control engineers to gain knowledge in nonlinear control systems would be another avenue for this book." (Sanqing Hu and Derong Liu, IEEE Transactions on Automatic Control, Vol. 53 (1), 2008)