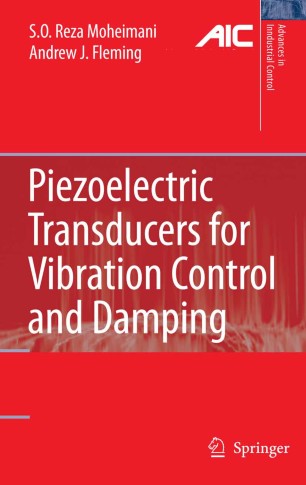 Flexible mechanical systems experience undesirable vibration in response to environmental and operational forces. The very existence of vibrations can limit the accuracy of sensitive instruments or cause significant errors in applications where high-precision positioning is essential so in many situations control of vibrations is a necessity.

• An overview of piezoelectricity.

• Modelling of flexible structures with embedded piezoelectric sensors and actuators.

• Innovative techniques to deal with the problem of hysteresis in piezoelectric transducers.

• Instrumentation for piezoelectric sensors and actuators.

An essential text and reference for graduates, researchers, and professionals working in mechanical engineering, aerospace engineering and mechatronics disciplines, this book will be a specially useful resource for scientists and engineers engaged in vibration control research.

Reza Moheimani's background is in robust control and its applications to real world systems. In particular, over the past seven years he has concentrated on applications of advanced control techniques in vibration control of flexible structures with embedded piezoelectric sensors and actuators. He has published in this area extensively with (to date) 54 refereed journal papers, has served as a Guest Editor for special issues of journals devoted to this topic and is an Associate Editor on IEEE Transactions on Control Systems Technology, Control Engineering Practice and International Journal of Control, Automation and Systems. He regularly reviews articles for 13 journals in control and mechatronics, including all the most important control journals. He has been very successful in attracting research funding in this field. Doctor Mohiemani has published two previous books, editing Lecture Notes in Control and Information Sciences Vol. 268 for Springer and Spatial Control of Vibration for World Scientific.

Doctor Moheimani teaches regularly in the undergraduate signal processing and control programs at Newcastle, has supervised several Ph.D. and Masters students to postgraduate qualifications and postdoctoral researchers from as far afield as Uppsala and Los Angeles. Doctor Moheimani has regularly been a member of program committees for international conferences including the IFAC World Congress in Prague (July 2005). He is a senior member of the IEEE and serves on the IFAC Technical Committees for Mechatronics and Robust Control. Previous to his current appointment at the University of Newcastle, he worked at the Australian Defense Force Academy in Canberra.

Andrew Fleming completed his Ph.D. in the field of Dynamics and Control of Smart Structures in 2003. His expertise lies in the analysis, design, and implementation of control systems for structural vibration control, acoustic noise control, and nano/micro-positioning systems. He is a technical reviewer for various journals including Automatica and the ASME Journal of Sound and Vibration. He is beginning to appear on the stage of international conferences, organising and chairing a session on Micro- and Nano-positioning at CDC/ECC in December 2005. He is a member of IEEE and SPIE.

The authors are the holders of three patents connected with vibrational damping apparatus.