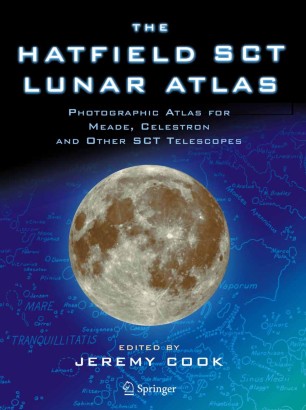 Photographic Atlas for Meade, Celestron and Other SCT Telescopes

SCT and Maksutov telescopes - which of course includes the best-selling models from Meade, Celestron, and other important manufacturers - reverse the visual image left for right, giving a "mirror image". This makes it extremely difficult to identify lunar features at the eyepiece of one of these instruments using conventional atlases, which show the Moon "upside-down" with south at the top.

This new SCT version of Hatfield's famous lunar atlas solves the problem. Photographs and key maps in the Hatfield SCT Lunar Atlas are exactly as the Moon appears through the eyepiece of an SCT or Maksutov telescope. Smaller IAU-standard reference photographs are included on each page, to make it simple to compare the mirrored SCT photographs and maps with those that appear in other atlases.

This edition uses the superb original photographs taken by Commander Henry Hatfield using his purpose-built 12-inch reflector. The key maps, on which lunar features can be readily identified, retain the style and clarity that made the original justly famous.