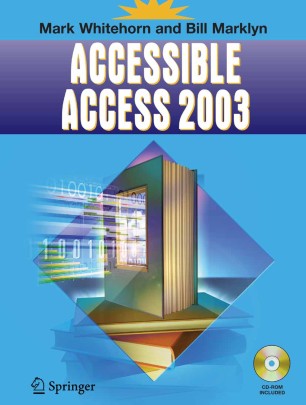 Written by the team which brought you Inside Relational Databases and based on their best-selling book for Access 2000, Accessible Access has been totally re-written for Access 2003.

Bill Marklyn, as the Development Manager for the first two major releases of Access, oversaw the entire design and so provides an intimate knowledge of the product.

We wrote Accessible Access 2000 for people who were new to the world of building databases. In that book we tried very hard not to simply list everything that we knew about the product. Instead we tried to act as intelligent filters, presenting only the essential information that you need to get started.

We were delighted with the reception that the book received and have tried to keep the same philosophy for Accessible Access 2003. However, rather than simply reprinting the book with 2003 in the title, we have gone through it with a fine toothcomb. Every screen shot has been retaken and every section has been re-checked to ensure, not only that it still works, but also that it is actually still relevant. We have re-written parts where the product has changed and also added some. For example, there is a new section on Object Dependencies and a whole new chapter about Data Access Pages - helping you to put your Access database onto an intranet.

Bill Marklyn, as the Development Manager for the first three versions of Access, oversaw the entire design and so provides an intimate knowledge of the product.

Mark Whitehorn designs and builds databases but is best known for his popular and long running database column in the UK magazine, Personal Computer World (PCW).