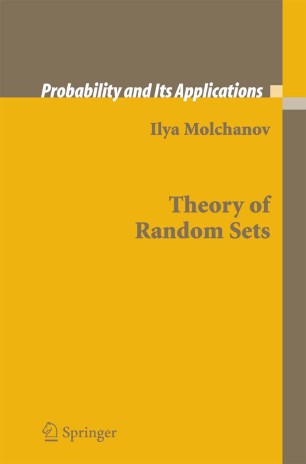 Stochastic geometry is a relatively new branch of mathematics. Although its predecessors such as geometric probability date back to the 18th century, the formal concept of a random set was developed in the beginning of the 1970s. Theory of Random Sets presents a state of the art treatment of the modern theory, but it does not neglect to recall and build on the foundations laid by Matheron and others, including the vast advances in stochastic geometry, probability theory, set-valued analysis, and statistical inference of the 1990s.

The book is entirely self-contained, systematic and exhaustive, with the full proofs that are necessary to gain insight. It shows the various interdisciplinary relationships of random set theory within other parts of mathematics, and at the same time, fixes terminology and notation that are often varying in the current literature to establish it as a natural part of modern probability theory, and to provide a platform for future development. An extensive, searchable bibliography to accompany the book is freely available via the web.