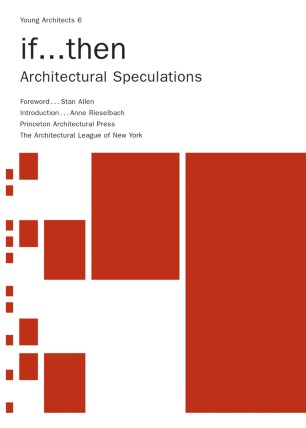 Stan Allen Architect; Dean of the School of Architecture, Princeton University The title of this year’s Young Architects competition derives from the language of the computer program. “If. . . then” is the contingent phrase built into the architecture of programming. With its origins in mathematical reasoning, it is the logical gate that indicates distinct pathways through the intricate structure of the computer algorithm. As such, it signals that architecture is entering a new phase in its complex relationship to digital technology. The definitive history of architecture’s relationship to the computer has yet to be written, but it would necessarily start with technology transferred from the military and engineering disciplines in the immediate postwar period. In recent decades, as the computer’s impact has shifted from the purely te- nical, it is possible to discern three distinct phases in architecture’s ongoing efforts to come to terms with what is still an evolving technology. In the first stage, under the influence of cyberpunk and deconstruction, the engagement with digital technology was primarily metaphorical. As access to the Internet expanded in the 1980s, many architects were fascinated by the potential of networked interconnectivity and fluid personal identity promised by this em- gent technology. The problem was that in reality available computer techno- gies were slow and expensive.