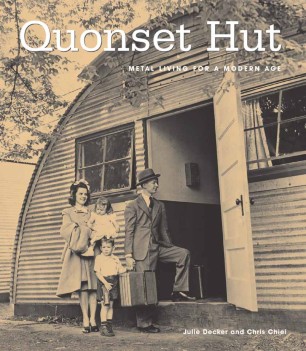 Metal Living for a Modern Age

Julie Decker x Acknowledgments xii Introduction The Hut That Shaped a Nation Julie Decker and Chris Chiei xv Chapter 1 How the Hut Came to Be Chris Chiei 1 Chapter 2 Quonsets, Alaska, and World War II Steven Haycox 31 Chapter 3 War, Design, and Weapons of Mass Construction Brian Carter 47 Chapter 4 After the War: Quonset Huts and Their Integration into Daily American Life Tom Vanderbilt 63 Chapter 5 The Huts That Wouldn’t Go Away: Alaska Adopts the Hut Chris Chiei 105 Chapter 6 Quonsets Today: Concluding Thoughts Julie Decker and Chris Chiei 133 Appendix: Hut Types 148 Notes 150 Image Credits 156 Index 161 Contributors 165 Preface Julie Decker Quonset Hut: Metal Living for a Modern Age is a project that began half a decade ago when architect Chris Chiei took note of the presence of Quonset huts throughout Alaska—more than half a century after the huts were sent around the world as temporary shelters for World-War-II soldiers, forming a major part of the inf- structure of war. Until now, the impact of Quonset huts in post–World War II life has not been documented in a comprehensive way. Quonset huts are referenced in a variety of publications, and everyone seems to be able to conjure up an image of a semicircle when they hear the word “Quonset,” but its story has not yet been told.