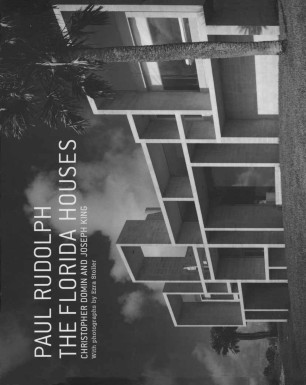 Paul Rudolph, one of the twentieth century’s most iconoclastic architects, is best known – and most maligned – for his large “brutalist” buildings, like Yale’s Art and Architecture Building. So it will surprise many to learn that early in his career he developed a series of houses that represent the unrivaled possibilities of a modest American modernism. With their distinctive natural landscapes, local architectural precedents, and exploitation of innovative construction materials, the Florida houses, some eighty projects built between 1946 and 1961, brought modern architectural form into a gracious subtropical world of natural abundance developed to a high pitch of stylistic refinement. Paul Rudolph: The Florida Houses reveals all of Rudolph’s early residential work. With Rudolph’s personal essays and renderings, duotone photographs by Ezra Stoller and Joseph Molitor, and insightful text by Joseph King and Christopher Domin, this compelling new book conveys the lightness, timelessness, strength, materiality, and transcendency of Rudolph’s work.