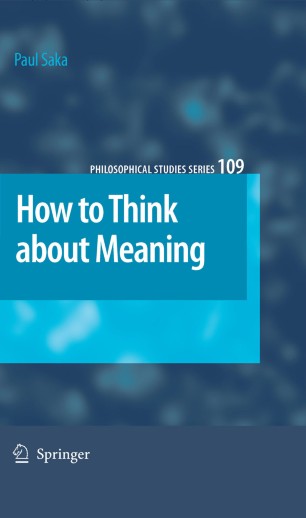 How to Think About Meaning

According to the dominant theory of meaning, truth-conditional semantics, to explain the meaning of a statement is to specify the conditions necessary and sufficient for its truth. Classical truth-conditional semantics is coming under increasing attack, however, from contextualists and inferentialists, who agree that meaning is located in the mind.

How to Think about Meaning develops an even more radical mentalist semantics, which it does by shifting the object of semantic inquiry. Whereas for classical semantics the object of analysis is an abstract sentence or utterance such as "Grass is green," for attitudinal semantics the object of inquiry is a propositional attitude such as "Speaker so-and-so thinks grass is green." Explicit relativization to some speaker S allows for semantic theory then to make contact with psychology, sociology, historical linguistics, and other empirical disciplines.

The attitudinal approach is motivated both by theoretical considerations and by its practical success in dealing with recalcitrant phenomena in the theory of meaning. These include: presuppositions as found in hate speech, and more generally the connotative force of evaluative language; the problem of how to represent ambiguity; quotation and the use-mention distinction; and the liar paradox, which appears to contradict truth-based semantics.