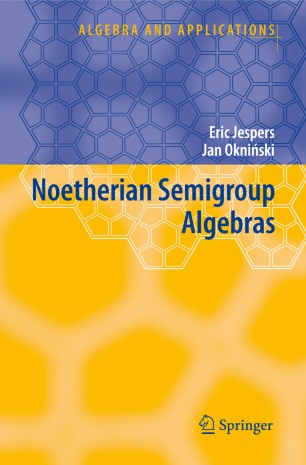 Part of the Algebra and Applications book series (AA, volume 7)

Within the last decade, semigroup theoretical methods have occurred naturally in many aspects of ring theory, algebraic combinatorics, representation theory and their applications. In particular, motivated by noncommutative geometry and the theory of quantum groups, there is a growing interest in the class of semigroup algebras and their deformations.

This work presents a comprehensive treatment of the main results and methods of the theory of Noetherian semigroup algebras. These general results are then applied and illustrated in the context of important classes of algebras that arise in a variety of areas and have been recently intensively studied. Several concrete constructions are described in full detail, in particular intriguing classes of quadratic algebras and algebras related to group rings of polycyclic-by-finite groups. These give new classes of Noetherian algebras of small Gelfand-Kirillov dimension. The focus is on the interplay between their combinatorics and the algebraic structure. This yields a rich resource of examples that are of interest not only for the noncommutative ring theorists, but also for researchers in semigroup theory and certain aspects of group and group ring theory. Mathematical physicists will find this work of interest owing to the attention given to applications to the Yang-Baxter equation.

"This book presents the main results and methods of the theory of Noetherian semigroup algebras over fields. … This is a highly technical and specialized monograph that will primarily be of use to researchers in the theory of semigroup algebras … . The many examples given in detail, and the general theory developed, may prove useful to those working in ring or semigroup theory." (Henry E. Heatherly, Mathematical Reviews, Issue 2007 k)

"This work presents a comprehensive treatment of the main results and methods of the theory of Noetherian semigroup algebras. … The main subject in this book is to present when some semigroup algebras are Noetherian and how they are under the Noetherian condition. … This book is a good reference for researchers who are interested in non-commutative algebra and non-commutative geometry through the method of semigroups." (Li Fang, Zentralblatt MATH, Vol. 1135 (13), 2008)