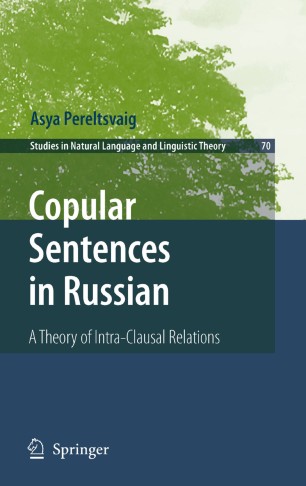 A Theory of Intra-Clausal Relations

On the assumption that Merge is defined in the simplest way possible, it is argued that not all syntactic structures are a(nti)symmetrical. One of the copular sentence types is analyzed as a poster child for symmetrical structures, while the other type is treated as asymmetrical. The originality of this study lies in treating the copula in the two types of copular sentences neither as completely identical nor as two distinct lexical items; instead, the two types of copula are derived through the process of semantic bleaching. Furthermore, it is argued that the two types of the copula need to combine with post-copular phrases of different categories. It is concluded that Russian draws a distinction between saturated DPs and unsaturated NPs, in spite of its renowned lack of overt articles.

"Asya Pereltsvaig’s book _Copular Sentences in Russian_ is the most recent contribution to this discussion, and an important one as well. Pereltsvaig’s book is both a careful investigation of the facts of Russian copular constructions and an important advance theoretically. … The scholarship here is of a very high quality and the book will be of great value not only to Russian linguists but also to researchers in the syntax, semantics and morphology of copular constructions cross-linguistically." (Andrew Carnie, Linguist, Issue List 19.3410, November, 2008)