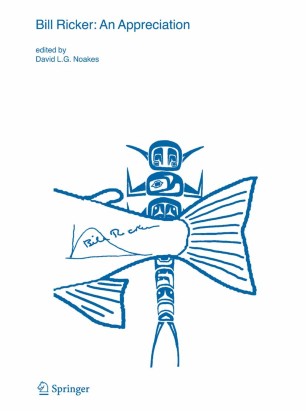 Part of the Developments in Environmental Biology of Fishes book series (DEBF, volume 24)

This book is the first complete biography of one of the founders of fishery science, William Edwin (Bill) Ricker (1908 - 2001). Bill is immortalized in the Ricker Curve. He developed the Curve in his studies of stock and recruitment in fisheries, but it has been widely applied in many areas of science. Bill is best known for his contributions to fishery science, but he was also internationally recognized as an entomologist and a scientific editor.
This book combines Bill’s own recollections with contributions from those who knew him and worked with him as a colleague during his multifaceted career. In an article written shortly before his death, Bill gives his own account of his career and intellectual development. A complete bibliography of Bill’s scientific publications, translations and manuscripts has been compiled by his son Karl, and accompanies this article. Karl has also written a detailed account of Bill’s early education and his accomplishments in botany and ornithology. Geoff Scudder summarizes Bill’s contributions to entomology, Jon Schnute provides both personal and professional insights into Bill’s mathematical accomplishments, and Dick Beamish and Don Noakes present personal recollections of Bill as a scientist and colleague.