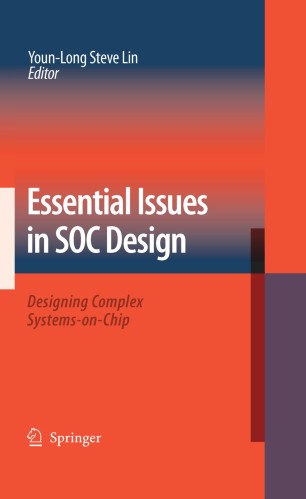 SOC design is fast becoming the key area of focus that engineers and researchers from the Electronic Design Automation field are focusing on in their quest to further develop Integrated Circuit technology. The more systems and even networks that we can integrate on one piece of silicon, the faster, cheaper, more powerful and efficient the technology will become.

Essential Issues in SOC Design contains valuable academic and industrial examples for those involved with the design of complex SOCs, all contributors are selected from a region of the world that is generally known to lead the "SOC-Revolution", namely Asia.

Youn-Long Lin was born in Yun-Lin, Taiwan, in 1957. He received his B.S. degree in electronics engineering from National Taiwan University of Science and Technology (formerly, National Taiwan Institute of Technology), Taipei, Taiwan, in 1982, and his Ph.D. in computer science from the University of Illinois, Urbana-Champaign, IL, U.S.A. in 1987. Upon his graduation, he joined National Tsing Hua University, Hsin-Chu, Taiwan, where he estabilshed the THEDA Group (Tsing Hua EDA), served as Director of the University Computer and Communication Center, Chairman of the Department of Computer Science, Secretariat General of the University and Director of the University Library. Dr Lin is now a professor of computer science. He is also an adjunct professor of Peking University, Beijing. He is elected the president of Taiwan Integrated Circuit Design Society (TICD) for 2005-06.

Between 1977-1979, Dr Lin was in military service with Chung Cheng Armed Forces Preparatory School as a Second Lieutenant. In 1979-1980, he was with Taiwan Cement Corp. as a field instrument engineer. In 1981-1983, he was with the Atomic Power Division of Taiwan Power Corp. as a mini-computer system administrator and database AP developer. In 1984-1987, he was a research assistant with the Department of Computer Science, University of Illinois, Urbana-Champaign, IL, USA. In 1998-1999, on sabbatical leave from Tsing Hua, he co-founded Global UniChip Corp., a fabless ASIC/IP/SOC vendor, serving as its Chief Technical Advisor. Between 2001 and 2003, he took a leave-of-absence from Tsing Hua working for UniChip as its Executive Vice President.

He has served on program committee, organizing committee, steering committee, and executive committee for several conferences and workshops on various aspects of CAD including the Design Automation Conference(DAC), the International Conference on CAD(ICCAD), the Asia South-Pacific Conference on Design Automation(ASPDAC), the Asia Pacific Conference on Hardware Description Languages(APCHDL), the workshop on Synthesis And System Integration of MIxed technology(SASIMI), the International Symposium on System Synthesis(ISSS), the International Symposium on Physical Design (ISPD), the ACM Embedded Software Conference (EMSOFT), and the VLSI/CAD Symposium of Taiwan. Professor Lin has also served on the editorial boards of the ACM Transactions on Design Automation of Electronic Systems (TODAES) , the ACM Transactions on Embedded Computing Systems (TECS) , Journal of the Chinese Engineering Society, and the Journal of Information Science and Engineering (JISE) .

Dr. Lin has been a consultant to the Institute for Information Industry (III), the Industrial Technology Research Institute (ITRI), the Electronic Research and Service Organization (ERSO), and the Computer and Communication research Laboratory (CCL). He is an advisor of the Science and Technology Advisory Office, Ministry of Education, R.O.C., in charge of VLSI design education program, and a co-PI of the Chip and System Implementation Center (CIC) program of the National Science Council (NSC), R.O.C. He also served on Intel's Asia-Pacific Advisory Board and advisory boards of several EDA and consumer electronics startups.

I have looked over the proposal. I think it is basically sound and Prof. Lin has assembled a good group of participants. All the chapters appear sound in scope and author backgrounds. In particular, the case study on the digital still camera controller sounds quite interesting and a good adjunct chapter in the book.

On another point - this seems like a good book to have translated into Chinese from the word go - (rather than first publish in English and then translate). Is a Chinese translation planned? Clearly if so it could become a standard text in Greater China area.