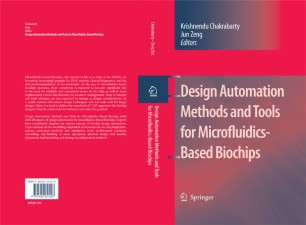 Microfluidics-based biochips, also known as lab-on-a-chip or bio-MEMS, are becoming increasingly popular for DNA analysis, clinical diagnostics, and the detection/manipulation of bio-molecules. As the use of microfluidics-based biochips increases, their complexity is expected to become significant due to the need for multiple and concurrent assays on the chip, as well as more sophisticated control mechanisms for resource management. Time-to-market and fault tolerance are also expected to emerge as design considerations. As a result, current full-custom design techniques will not scale well for larger designs. There is a need to deliver the same level of CAD support to the biochip designer that the semiconductor industry now takes for granted.