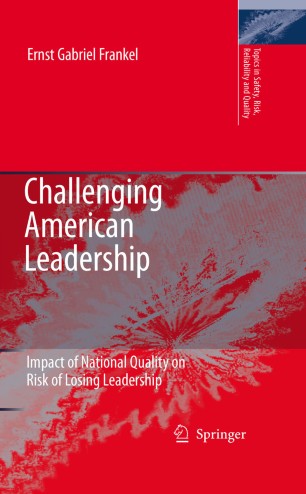 Impact of National Quality on Risk of Losing Leadership

After leading the world during most of the 20th century in economic, political, technological, military, and even social terms, America’s role is now being challenged. Its values questioned, and its methods often disparaged, America had become the clear example to be followed or even copied, yet its more recent strategic and political decisions gained little international support and a lot of outright opposition. The quality of its national planning and decision making has been severely compromised, and risk management appears to be largely absent. India and China are now emerging as new economic powers, with advancing technological prowess. Their focus is on socioeconomic development, but their capabilities and potentials are much broader and may challenge America's leadership before long, unless it recognizes the changing demands of the new wide open globalized world.

Ernst G. Frankel has a B.Sc. and M.Sc. in Engineering, Ph.D. in Transport Economics, an MBA in Systems Management, and a DBA in Operations Research. He has been a member of the MIT engineering and management faculty from 1962 to his retirement in 1996. He has extensive management experience and served as Technical Director of Litton Industries, Director of Engineering of Sealand Corp., Operations Advisor for the Port of Singapore, Advisory Board of the Panama Canal Authority, Director of several major shipping and logistics companies, Director of Operations of Pascagoula Shipyard, Advisor to Hyundai Heavy Industries (Korea), Advisor to Mitsui Shipbuilding and Engineering (Japan), and numerous other industrial firms, as well as governments. He also served as an Executive of the World Bank from 1982 to 1989. He has published 13 books (see list) and over 220 refereed journal articles. He has worked and lived in over 67 countries on all five continents.

"In this wide-sweeping and copiously documented work, Frankel … asserts that America is being challenged as the leader in the international community, especially with respect to economic strength, technology, and military power. … Frankel offers an accessible, provocative work. Summing Up: Recommended. General readers, graduate students, and professionals." (H. I. Liebling, CHOICE, Vol. 44 (9), May, 2007)