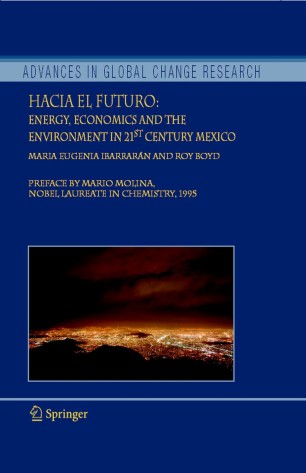 Energy, Economics, and the Environment in 21st Century Mexico

The book focuses on the impact of future energy policies on fossil fuel use, environmental quality, and economic growth in Mexico over the next 20 years. The first part examines the growth of the Mexican energy sector and its link to international trade, government revenues, economic welfare, income distribution and environmental pollution. The scientific linkages between greenhouse gas emissions and climate change are presented with the economic theory behind various emission abatement strategies. The authors examine the harmful effects of climate change on economic well being in Mexico and explain the role of Mexico and Latin America in current climate change negotiations.

The second part develops a dynamic Computable General Equilibrium model of the Mexican economy, paying attention to the energy sector and its linkages with other aspects of the aggregate economy. Conclusions for Mexico are placed in the wider context of the Americas. The effects of climate change policy are contrasted with that in Venezuela, Argentina and Brazil. Finally, by employing an integrated US-Mexican model the authors look at possible advantages of emissions trading between these two countries.

This book could serve as a supplemental text in a number of different classes in environmental and resource economics, development, modelling, and negotiation of international treaties. Executives from the energy sector would also benefit in the United States, Mexico, and throughout Latin America.