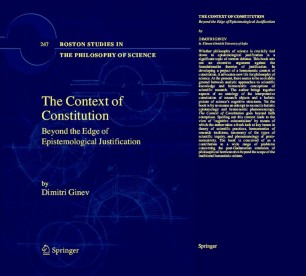 The Context of Constitution

Beyond the Edge of Epistemological Justification

This study brings together ideas developed over many years in various lectures in an endeavour to clarify the concept of hermeneutic fore-structure of scientific research. The starting point of my investigations was the outline of an interp- tative approach to the constitution of science’s cognitive content. In the late 1970s I was preoccupied with a question that nowadays should be formulated as follows: Is it possible to claim a validity of the hermeneutic view of the “situatedness in a tradition” also for the natural sciences? I was convinced that the negative answer implies a self-defeating position. It states that in order to champion the (cultural) universality of hermeneutics, one has to profess the non-hermeneutic nature of the natural sciences. Paradoxically enough, this a- wer presupposes a sharp dividing line (between dialogical experience and monological research) in culture in order to stress the universality of hermeneutics. Long before the period of perestroika in my corner, I learned from Joseph Kockelmans, Patrick Heelan, and Theodore Kisiel how the universalization of hermeneutics can include the natural sciences without ignoring their cognitive specificity. Somewhat later, in the aftermath of the discussions over the “finalization of science”, I began to confront the view that it would be a kind of trivializing the struggle for a philosophical hermeneutics if the theory-observation nexus is treated as a specific hermeneutic circle. No doubt, the view is correct. I was, however, dissatisfied with the way of arguing for it.