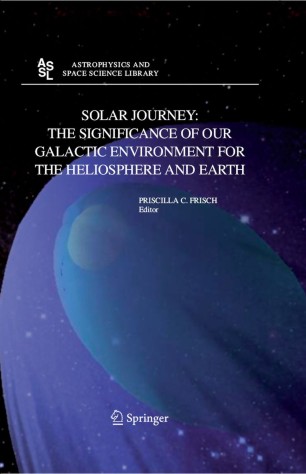 Solar journey: The significance of our galactic environment for the heliosphere and earth

Humans evolved when the Sun was in the great void of the Local Bubble. The Sun entered the present environment of interstellar clouds only during the late Quaternary. Astronomical data reveal these long and short term changes in our galactic environment. Theoretical models then tell us how these changes affect interplanetary particles, planetary magnetospheres, and the Earth itself. Cosmic rays leave an isotopic signature in the paleoclimate record that helps trace the solar journey through space.

"Solar Journey: The Significance of Our Galactic Environment for the Heliosphere and Earth" lays the foundation for an interdisciplinary study of the influence of interstellar material on the solar system and Earth as we travel through the Milky Way Galaxy. The solar wind bubble responds dynamically to interstellar material flowing past the Sun, regulating interstellar gas, dust, and cosmic particle fluxes in the interplanetary medium and the Earth. Cones of interstellar gas and dust focused by solar gravity, the magnetospheres of the outer planets, and cosmic rays at Earth all might yield the first hints of changes in our galactic environment.

Twelve articles from leading experts in diverse fields discuss the physical changes expected as the heliosphere adjusts to its galactic environment. Topics include the interaction between the solar wind and interstellar dust and gas, cosmic ray modulation, magnetospheres, temporal variations in the solar environment, and the cosmic ray isotope record preserved in paleoclimate data.

The breadth of processes discussed in this book make it a valuable resource for scientists and students doing research in the fields of Space Physics, Astronomy and the Paleoclimate.

"I admire the great care that Priscilla Frisch has taken in the editorial work, the balanced subjects, the attractive and clear figures. Also the general topic is well chosen and the various chapters are presented very clearly." - C. de Jager